As far as online slot games go – Cash Vandal by Play’n Go is smooth. It’s one of the smoothest slot games that we have ever played. And this is mostly due to the great music in the background that has that jazz feel to it. But let’s not get ahead of ourselves. You can read more about this smooth game down below.

The theme of Cash Vandal 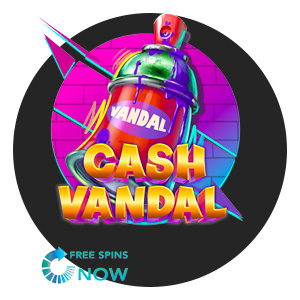 The theme of Cash Vandal is graffiti artistry. The game is played on the outside of a wagon of a moving train. The symbols are all catchy and have a special quirk. There are various fruits that remind one of the old classic fruit slots. But the twist here is that the fruits are squished somewhat, so to speak. Their juices spill out. And we can’t really pinpoint it, but there is something unique about the presentation of the theme.

Something that’s bigger than the sum of the parts. You wouldn’t believe that a moving train would be a great slot theme, right? Well, Play’n Go have managed to indeed create a quality theme out of this setup.

And the train moves all around the world – this is a part of the game. For example, you will be visiting the cities of Paris in France, London in England, and Berlin in Germany. All of them have distinctive backgrounds that will make you feel like you’re there. The train is moving all the time while you play and this adds to the atmosphere. It really looks like you’re going somewhere.

The features of Cash Vandal

The game doesn’t feature the classic layout. It has 4 reels and 3 rows, which is a deviation from the standard 5×3 reel set. There are ten pay lines in total. This may make it seem like this is a boring game. But the contrary is true. This is a very exciting game as the special features tend to come out very often.

London will give you mystery symbols. Paris will make the first two reels synchronized. And Berlin will give you wild symbols. So, in a sense, you will really feel like you’re travelling around the world and exploring new things.

We have grown very fond of the Cash Vandal slot game by Play’n Go. When you think about it – there is nothing all that special about this game at the face of it. But give it a chance. It will grow on you and hopefully you can earn some money from it as well. Playing slots is a leisure activity for many people and when you are lucky there might even be some revenue to gain from it. There is something special in the way it’s executed. We hope that you will get to enjoy playing it.